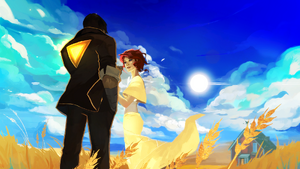 The Country is a reference within Transistor about a place that has not been touched by the technology of Cloudbank or its inhabitants. In theory, this is the place which all people of Cloudbank wish to travel to, "but never come back", according to Royce Bracket. In some way, this can reference to the afterlife or a place within the Transistor.

Accessibility of the Country within the game.[edit | edit source]

There are two moments in the game which can be considered to be the Country by the standards of the word's definition; a very rural, natural place almost untouched by humans.

The first moment is the final battle with Royce Bracket, which is a place similar to a farm-field. This field takes place within the Transistor, or a machine in connection to the Transistor and the mainframe of the Process.

The second encounter with a place that can be considered the Country is the last Credits screen, in which Red meets her lover. It shows a farm building in the background and the two characters in a wheat field.

Retrieved from "https://transistor.fandom.com/wiki/The_Country?oldid=5819"
Community content is available under CC-BY-SA unless otherwise noted.