Welcome to the Transistor Wiki

Transistor is a science fiction action RPG video game by Supergiant Games. It was released on May 20, 2014 for Microsoft Windows and PlayStation 4, and has since released on Mac OSX, Linux, iOS, tvOS, and Nintendo Switch. 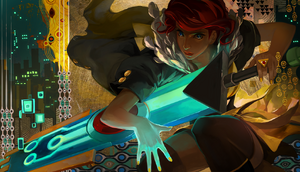 Transistor is a science fiction action RPG video game by Supergiant Games, the creators of the critically-acclaimed Bastion. It was released on May 20, 2014 on Microsoft Windows and PlayStation 4 platforms. Red, a famous singer in a city called Cloudbank, is attacked by The Process, a robotic force commanded by a group called the Camerata. During the clash, she is transported all the way across Cloudbank and comes into possession of the mysterious Transistor--the greatsword-like weapon. Read More

Retrieved from "https://transistor.fandom.com/wiki/Transistor_Wiki?oldid=6035"
Community content is available under CC-BY-SA unless otherwise noted.